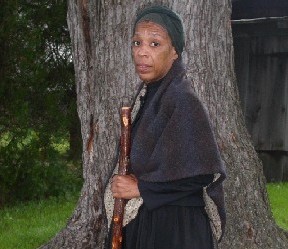 Gwendolyn Briley-Strand has been delighting audiences on stage, radio, television and in movie theatres for over thirty years.   She is a member of SAG-AFTRA, & Actor’s Equity Association (AEA). Her television and movie credits are extensive.  Her commercial voiceovers can be heard on Network and Cable stations.  The PSA (Public Service Announcement) she filmed for Substance and Child Abuse received a Emmy, the film “Atif’s Journey” where she appears as Atif’s mother received the 1997 Cable Ace Award for the Best Educational Program Series for the health education of the children of Prince George’s County Public Schools.

Ms. Briley-Strand has been touring her one-woman show “Harriet Tubman: The Chosen One“, since 1993.  It has been presented for hundreds of schools, and organizations nationally and internationally, the J.F. Kennedy Center for the Performing Arts in Washington DC, The Smithsonian National Museum of American History in Washington DC, The New York State Museum in Albany NY just to name a few.

In 1991 and 1992 Ms. Briley-Strand was invited to bring the character of Harriet Tubman to the White House for the 4th of July celebration.

In 2008 Ms Briley-Strand premiered her second, one-woman show “Rosa Parks: Such A Time” for the state of Maryland’s 2008 Chautauqua.