It’s another afternoon to get together and watch a great film.  We’ll have beverages and maybe even pop corn.  Please join us. Here’s what Rotten Tomatoes says about Scaramouche: 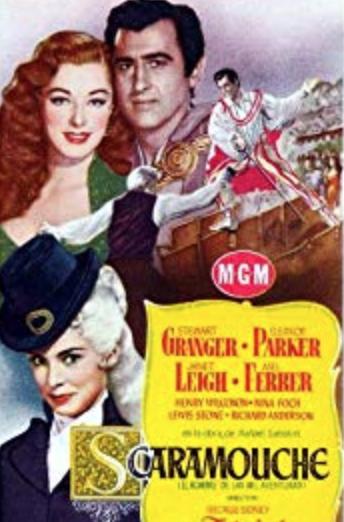 o is publicly humiliated by the Marquis de Maynes (Mel Ferrer). Challenged to a sword duel by the Marquis, Andre, who knows nothing about fencing, runs away, taking refuge with a theatrical troupe. He hides behind the personality of Scaramouche, a zany clown, and in his spare time romances his sexy leading lady Lenore (Eleanor Parker). Seeking revenge against de Maynes, Andre takes fencing lessons from sword master Doutreval (John Dehner). It isn’t long before Andre has developed a reputation as the finest swordsman in France–which, as intended, arouses the ire of de Maynes. The two opponents face off in a deserted theater; the ensuing sword duel, running nearly seven minutes, is one of the best ever committed to film. Before he can plunge his blade into de Maynes, Andre discovers that he and the Marquis are half-brothers. The two men instantly forget their differences, and Andre’s honor is fully restored. He ends up not in the arms of the sensuous Lenore but with a woman of his own class, Aline de Gavrillac (Janet Leigh)–while a gag ending reveals that Lenore has found herself a new and highly influential boyfriend. Lewis Stone, star of the 1923 silent version of Scaramouche, appears in the remake in the supporting role of Georges de Valmorin. ~ Hal Erickson, Rovi”